It was a fitting conclusion to a variety of the year long golden jubilee celebration programmes opened with the flag hoisting on18th June 2008 by Diocesan Metropolitan H.G.Geevarghese Mar Coorilos 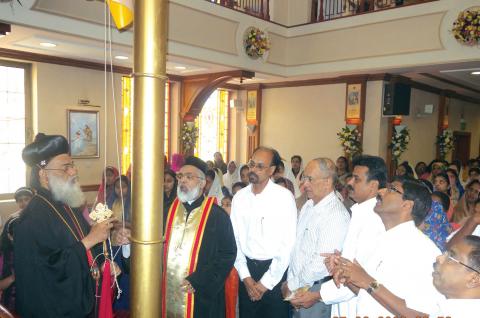 Earlier in the day, the flag of the Golden Jubileecelebrations hoisted in the church was drawn down by Diocesan Metropolitan H.G.Geevarghese Mar Coorilos in a function following Holy Qurbana and handover to the General Convenor, Mr. George Philip to be hoisted at the procession of the finale function .

Our little ones in procession.

Fifty ladies, members of the cathedral dressed in traditional Kerala saree held a flag each, and fifty Sunday school children dressed as angels to mark the fifty years were an added attraction to the banner march. 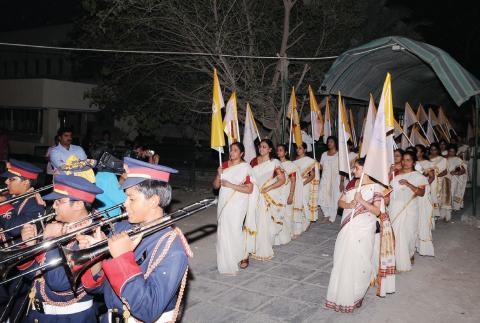 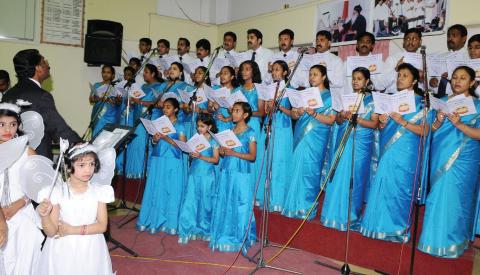 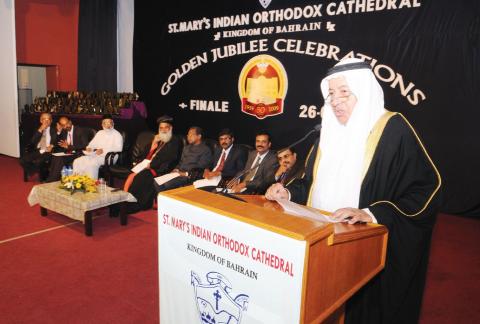 The Public meeting started at 6 pm. The auditorium was filled withenthusiastic church members who turned out in large numbers including dignitariesand invited guests from sister churches.

The meeting was presided over by His Grace, Gheevarghese Mar Coorilos,Metropolitan of Bombay Dioceses, Indian Ambassador to the Kingdom ofBahrain, H. E Dr. George Joseph, the chief guest who inaguarated the meeting.

His Excellency Abdul Nabi Al Shola, who previously served as – Minister for Labour and Social Affairs in the Kingdom of Bahrain, who is a renowned friend of the Indian community in Bahrain and holding the position of the Chairman of the Indo Bahrain society was the guest of Honour.

His Excellencey the Indian Ambassador Dr.George Joseph expressed hisappreciation at the special emphasis given to humanitarian projects the Church has undertaken to mark its jubilee celebrations. He said, he is inaugurating the next fifty years of activities of the Church.

Audience at a glance

His Grace Geevarghese Mar Coorilos, who gave the presidential address, voiced his deep gratitude to the Royal Family and the rulers and officials and people of Bahrain for their support to our community. Thirumeni also expressed his appreciation that the major part of the income generated through golden jubilee celebrations was spent on charity programmes.

Rev Fr Saji Mathew,Vicar brought out the biblicalsignificance of jubilee celebrations in his speech and said it is an occasion for, remembrance,remission, renewal.

Mr.Soman Baby recalled the great event of Silver Jubilee celebrations of the church attended by Late Paulose Mar Gregorious, the world renowedtheologian and His Excellency Al Shola ,Mr. Tariq Almoayyed, the thenForeign minister of Bahrain. He called, the guest of honour, Mr. Al Shola, a friend of us, who is always there , ready to support us in our needs.

Mr. George Philip gave the vote of Thanks.

H.G. Geevarghese Mar Coorilos washonoredby presenting shawl and Vicar was
honoredby giving memento.
During the meeting those who contributed to the successful organising of the jubilee celebrations and who served the church duringthe past years in official capacities were honoured by giving mementos.
The Golden Jubilee, Smaranika-YOBEL was released by H.E.Dr.George Joseph,The Indian Ambassador to Kingdom of Bahrain.
The Golden Jubilee Fair Souvenir was released by H.E.Abdul Nabi Al Shola, Former Minister for Labour and Social Affairs in the Kingdom of Bahrain.
A documentary prepared by The Golden Jubilee documentarycommittee, was filmed at the beginning of the meeting. A detailed account of the various activities of the jubilee celebrationswas artistically and professionally put in a nutshell, and received special mention from the dignitaries. The meetingconcluded with love feast.