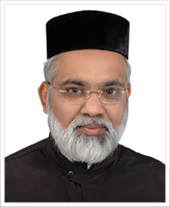 Achen is a member of St. Thomas Orthodox Church (Bethany), RanniPerunadu, and is from the Kadavil family. He become a Sub-Deacon in 1990 by H.G Paulose Mar Milithios, Full Deacon in 1993 by H G Geevarghese Mar Coorilos and called in to Priesthood in 1993 by H G Dr Philipose MarTheophilos. Achen is married to Ms. Betsy (D/o. George Varghese, Brights,Ambernath) and blessed with two children, Rebekah and Reuben. He has served as a warden of MGOCSM Kottayam Student Centre in 1991and 1992. He was the Printer and Publisher of the Bombay Diocesan Bulletin TheGateway from 1996 to 2007.

He has served the Vicar ship in Orthodox Churches in Dombivli, Andheri, Borivili, Kalamboli, Kalina and Asst Vicar in Dadar Church before taking over charge as vicar in St. Marys Indian Orthodox Cathedral, Bahrain.

Achen started intersession to St Thomas on Sundays. He took over as the president of Kerala Christian Ecumenical Council (KCEC) and thatorganization reached higher dimensions. He organized a Special Prayer for the King and the Country of Bahrain. His able and effective guidance helped to move into what the parishioners proudly come together for theirspiritual uplifting and prayers.