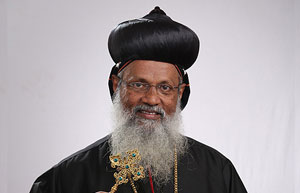 His Grace was born on 15th September 1955 as the eldest son of Mr.P.M.George and Mrs. Aleyamma George of Punchayil family in Pandankary, Edathua, Alapuzha. His Grace is a member of St. Mary’s Orthodox Church, Padankary.

His Grace’s early education was in Thalavady. After passing the S. S. L. C. Examination His Grace became a member of Perunad Bethany Ashram. Graduating in English literature as a student of Baselius College Kottayam, His Grace joined the Orthodox Theological Seminary, took his B. D. degree and was ordained as a priest in 1982.

His Grace took M. A. in History from the University of Kerala and B.Ed. from Sardar Patel University. His Grace was the Principal of Bethany St. John’s Higher Secondary School during the period between 1987 and 1996. His Grace had been the President of Perunad YMCA for a long time. His Grace is the Secretary of the Sanyasi-Sanyasini Sangham of the Malankara Orthodox Church.

From 1996 His Grace has been the Superior of Bethany Ashram. His Grace has also served as the Manager of Angamuzhy Orthodox Centre and member of the Ecumenical Trust. His Grace was ordained as Ramban at Parumala on 4th December.His Grace is serving the Idukki Diocese as its Metropolitan.