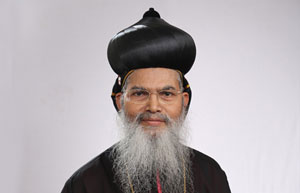 His Grace was born on 15 August 1949 to Mr TO Cherian Mrs Kunjelyamma Cherian of Aruvidan Pallikal Family, Kallupara. He did his high-schooling at MGD High School, Puthussery and pre-degree course at Chengannur Christian College.

Coming to the theological front, His Grace did his BD degree from Serampore University and MTh from the US.

He was ordained a deacon in 1970 by late His Grace Thoma Mar Dionysius and a priest in 1975 by H.H.Baselios Marthoma Didymos I. He became a Ramban on 19 December 1992.

On 16 August 1993, HH Baselios Mar Thoma Mathews II consecrated him as Episcopa and named as Jacob Mar Irenios. In August 1995, he was given charge of the Malabar Diocese as the Assistant Metropolitan. When Zacharia Mar Dionysius departed for the eternal life, His Grace was given the charge of Madras Diocese.

His Grace has served the church in different capacities as the President of Orthodox Youth Movement and President of the Orthodox Christian Bala Samajam.His Grace is presently given the charge of Kochi Diocese.